It is well deserved recognition for the years of dedication and commitment to NSW Ambulance and the community. Mr Elliott commenced his service with NSW Ambulance in 1987 and worked at a number of stations in northern New South Wales. In 2010 he was seconded to the Northern Control Centre and was appointed Control Centre Manager in 2011. He acted in the role of Director, Frontline Services and was later appointed Director, Infrastructure and Assets.

Since September 2019 he has acted in the role of Director, Control Centres, and in this position he has led a team to achieve sustained improvement in the speed of answer to Triple Zero (000) calls.

He continues to be an operational staff member and has been involved in a range of major events and emergencies. He is an adaptable leader capable of stepping into any role at short notice and quickly making a positive impact.

Mr Elliott has provided distinguished service to NSW Ambulance, and to the community, for over 32 years. 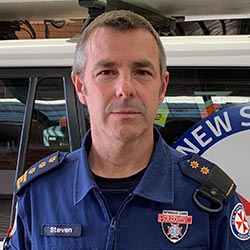 Mr Lobley has served NSW Ambulance for 30 years, joining the organisation in 1990. He has dedicated his career to enabling and developing the NSW Ambulance specialist wilderness and remote area response capability, and is viewed as an expert in specialist patient access and evacuation.  He currently holds the rank of Inspector.

He possess excellent clinical, management, leadership and people skills and has been instrumental in the development and delivery of the Special Casualty Access Team (SCAT). He has instructed on almost every NSW Ambulance Remote Area Access (RAA), SCAT Course and re-certification over the past 17 years.  He has also spent 10 years as a helicopter paramedic.

He is a technical expert in accessing, treating and evacuating patients in difficult, hazardous and remote environments, such as caves, cliffs, canyons and collapsed buildings and is well respected across the emergency services and broader rescue and outdoor industries. His expertise and guidance on specialist paramedic operations is second to none, with his expertise sought by industry and at technical forums across NSW.

Mr Lobley's commitment to ensuring NSW Ambulance can deliver excellence in care to patients, regardless of their location, is of the highest calibre.

Mr Morrison has served NSW Ambulance for 24 years, joining the organisation in 1996 as a paramedic. He has dedicated his career to developing the NSW Ambulance education programs, clinical governance and paramedic skills, and is an expert in paramedic education.

He is an outstanding leader with excellent clinical, management abilities and vision. He is a certified Intensive Care Paramedic and maintains clinical practice currency on the road in metropolitan Sydney.

He has demonstrated his commitment to both NSW Ambulance, and the paramedic profession nationally, through his development of, and support for, a professional education system across Australia and New Zealand. He has driven change and the development of a contemporary, clinically focussed education platform, specifically regarding graduate internship, control centre education, and mandatory clinical training.

In his 13 years as Director of Education for NSW Ambulance he has guided the organisation through transition from a largely vocation based to a graduate workforce. He recently led the NSW Ambulance Education Unit through the successful inclusion of paramedicine as a registered health profession.

Mr Morrison's commitment to paramedic education ably demonstrates his dedication to NSW Ambulance, and to the community of NSW.