A flood of support There are plenty of tragic stories behind this month’s severe weather event. But from this disaster there have also been incredible examples within NSW Ambulance of support, resilience and hope.

Teamwork. On a daily basis this is a word that holds great significance in the pursuit of positive outcomes at NSW Ambulance.

But there’s perhaps no better example of how powerful this word is than how it was put to use by our staff during a two-week period earlier this month.

The torrential rain, severe winds and in particular flash flooding that tore through our great state caused unfathomable destruction.

Western Sydney, Hunter-New England and especially the North Coast copped the worst of it.

But through all the tragedy that occurred – and there has been plenty of it – there is a silver lining.

That silver lining is how our staff, from all different parts of the organisation, banded together to support our colleagues, their families and patients in floodaffected communities.

A/Superintendent Daniel Willis, who was one of several Incident Controllers for the North Coast Sector 2022 Flood IMT, saw how his colleagues pulled together to support those in a region that needed it the most.

In the North Coast there were NSW Ambulance staff isolated from their families, while some lost their homes.

Others lost stations - considered by many a “second home” given the pride they have in their job.

But despite those challenges, there was no shortage of people in our organisation putting their hand up to help in any way they could. 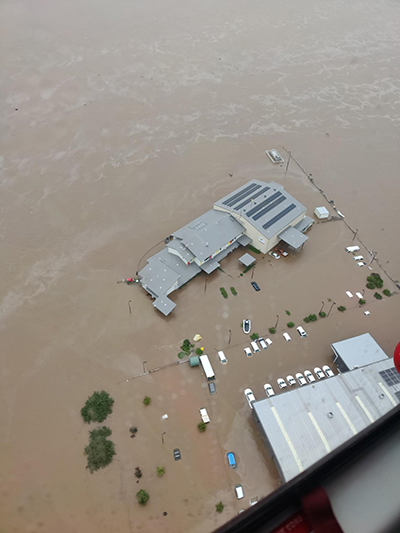 “I’m very proud of everybody involved in the operation, and in the North Coast in particular,” Daniel said.

“A big shout-out to all the paramedics in the North Coast for their work.

“We have numerous reports of our people going above and beyond across our sector, doing the best they can for patients isolated by floodwater, in areas which were difficult to access - and all the while these paramedics had been affected in their own personal lives.

“For some there was the loss of homes, while others have had families displaced… yet still they continued to work to provide care to their communities and patients who required their assistance.

But it was the organisation as a whole, and it’s response to the North Coast, which truly left him in awe.

“The support from the wider organisation to the North Coast has been exceptional,” he said.

“I think this is the biggest and best response we have had into the North Coast for a natural disaster.”

The deployment of Special Operations Teams, additional Aeromedical Operations assets and Extended Care Paramedics were part of the response to the North Coast.

Both in and away from the North Coast, on-road paramedics and control staff right across the state showed incredible resilience and support for one another.

And then there was, of course, the support services offered by Staff Health to all employees and their families who were affected, irrespective of where they are based in NSW. Staff Health’s impact in the North Coast is again something Daniel is keen to highlight.

A standout example – which epitomises the opening word used for this story – saw 250 frozen meals delivered to flood-affected staff in the region. 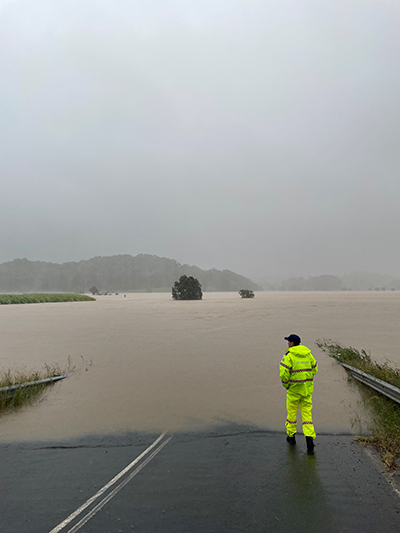 NSW Ambulance Senior Chaplain Paul McFarlane - through an established relationship with Our Big Kitchen (OBK), run by NSW Ambulance Chaplain Rabbi Dovid Slavin – helped to source the frozen meals. They were then delivered to Fixed Wing Operations at Mascot.

The North Coast IMT then received the food delivery via Fixed Wing at Coffs Harbour, which were then refrigerated overnight at a local pub who assisted.

The food was then transported by paramedics from Grafton Ambulance Station to Lismore the next day.

As Daniel explains, it’s examples like this that are “heart-warming to see.” 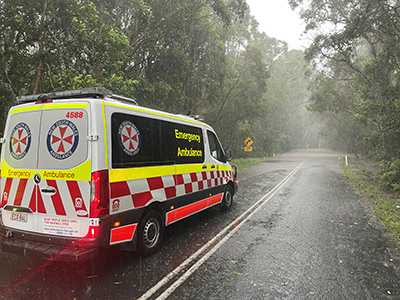 “Another, involving paramedics who lost their homes, has seen off-duty paramedics travelling into those areas to assist colleagues with the clean-up of their homes.

“That camaraderie and paramedic spirit is really coming through as the flood waters begin to recede.”

What’s been remarkable to me is the way in which people have come together and supported each other – not only on the road and at work, but outside of work as well

Stories like this are what Dr Dominic Morgan, Chief Executive describes as “hallmarks of what NSW Ambulance stands for”.

“It has been another significant effort by the staff of NSW Ambulance over the last fortnight, dealing with unprecedented floods around the state," Dr Morgan said.

“What’s been remarkable to me is the way in which people have come together and supported each other – not only on the road and at work, but outside of work as well.

“I’m hearing incredible stories of people giving support to each other, and then fronting up the very next day to go out and support their communities. There’s so many tales of people going above and beyond, where people have spent literally hours and hours, and in some cases overnight, staying with patients who have been isolated and were unable to be rescued at the time.

“I’m incredibly thankful for the efforts of our staff.”

Director of Helicopter Operations Cameron Edgar is incredibly proud of the way his staff have responded to what he considers “one of the busiest and most complex periods in our history”.

“On one hand I’m not surprised at all at what individual aeromedical staff and the collective aeromedical team has achieved, as that is what we select and train them for,” he said.

“However, on the other hand I continue to be amazed at their ability to safely complete the most complex of aeromedical missions under the most demanding of circumstances.

“I am incredibly proud of all of our team, but I want to make special mention of the Lismore Helicopter team who continued to undertake flood rescues whilst evacuating their base and moving to an alternate location at Ballina Airport without a loss in service delivery. Their commitment to duty and service to the community is in the finest traditions of our services.”

“I’m exceptionally proud of the commitment and dedication of our specialist paramedics and staff throughout the entire CTEM unit,” Richard said.

“I’m grateful for the efforts of our team in the field as well as those who provided planning, preparedness and response support in IMTs and control centres. A big thank you to all.”