Congratulations to Chief Superintendent Paula Sinclair and Inspector Peter Rowlands who were awarded the Australian Ambulance Service Medal as part of the Australia Day 2021 Honours List. Paula Sinclair is a senior manager with an exemplary record of distinguished service to NSW Ambulance for over 26 years. She has excelled as a clinician, operational manager, mentor and role model.

Paula commenced with NSW Ambulance in 1994 and has worked in a range of roles across sectors including station management, special operations teams, leading well-being programs and sector management. Paula was appointed Deputy Director Clinical Operations Sydney & South Eastern Sector in 2018 and in July 2020 was appointed Acting Director, Fixed Wing Aeromedical.

Paula is a passionate and skilled clinician, who has dedicated her career to ensuring her patients receive the highest standard of clinical care. She is an outstanding leader who is widely respected for her clinical capabilities and her strong leadership both in the clinical setting and in management roles. Paula has been instrumental in the development of processes and procedures for safety systems, and assisted in the negotiations and integration of a new service provider for NSW Ambulance helicopters.

Paula is a compassionate leader whose concern for staff welfare is paramount. She was a driving force for the Wellbeing Program which has been rolled out to the NSW Ambulance workforce to educate and assist paramedics in investing in their own health and wellbeing. While in the role of Deputy Director Clinical Operations for Sydney & South Eastern, Paula introduced a resoundingly successful Coffee & Cases initiative, a safe platform for paramedics to discuss cases and the challenges they face while delivering patient care. 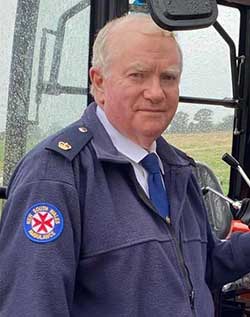 Peter Rowlands has worked in a number of leadership roles since joining NSW Ambulance five decades ago and has spent many years supervising large numbers of staff. Peter’s career has involved the exemplary delivery of clinical services, leadership, innovation and staff support. He played a key role in the original roll out of defibrillators to every ambulance in NSW, an Australian first at the time.

Peter also regularly undertakes the role of Protocol Officer for formal ceremonial and memorial events and provides dignity and respect to the most solemn occasions such as staff funerals. Importantly, he takes the time and effort to educate and inform staff about the requirements and expectations, ensuring personal attention so everyone feels comfortable in their role.

Most notably, in 2006 Peter became a Peer Support Officer (PSO) for NSW Ambulance within the greater Sydney area. This was a natural role for Peter and he has further demonstrated his exemplary leadership skills in this role. Following his transfer to regional NSW his peer support work has seen him complete many additional hours and travel hundreds of thousands of kilometres to provide direct support to his colleagues and their families. Peter has tirelessly assisted his colleagues with work and personal issues to ensure they are given the best possible care and support available at all times.

Peter has consistently shown strong leadership skills throughout his long-standing career. He is a well-respected mentor and leader and is often the person staff will go to for advice and guidance. Peter is a reliable, compassionate leader whose concern for staff welfare is paramount. Peter is a humble and unassuming man, a quiet and empathetic leader whose unfailing support to his staff is something to aspire to.